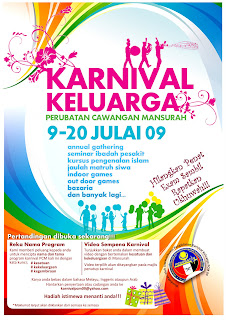 apparently PCM (perubatan cawangan mansurah) has done a lot for its members with all those programmes throughout the years. Long list of programmes but still with the same aim- to allow the members know each other and to strengthen the ukhuwah amongst them. many have known how the number of Malaysian students here in Mansurah are a lot that make it no longer possible for u to know every single one of them. u come and encounter one face, another day u gonna meet the other ones, and the day after tomorrow u gonna see a lot more and eventually forget those of the past. " Macam pernah kujumpa muka ini tapi di mana ya?? " i guess all the seniors used to go tru this.

event by event, programme by programme, day by day, all those we had passed through, but sometimes we missed something in between. I can see the same faces to line up as the committees in such programmes.to attend the meeting and to see familiar faces show up, almost 90%, i'll say " wow " . the reason might be because " o ya, that fella has a lot of experiences, so we shud elect that fella as the committee " nothing goes wrong with that, but still i dun think that's a good phenomenon. new faces shud be emerged so as to allow everyone to have a fair chance mingle around and gain experience dealing with all those stuff. one day sooner or later u gonna come down and thus dealing with society ( the patients etc ) and being active in the persatuan as u may say are of such ways to enhance and polish your skill. u gonna learn a lot, seriously.

1. new fresh faces should be recruited. ajkt2 Karnival y telah dilantik i would suggest to take alot more new faces to help out for the day. u wont lose anything but to gain more in the days to come